The Pink Star – the world’s most valuable polished diamond and the world’s largest internally flawless vivid pink diamond, weighing 59.60-carats, estimated to sell for a dazzling $60m, is up for auction at Sotheby’s on Fri 4 April 2017 in Hong Kong.

The Pink Star has received the highest colour and clarity grades from the GIA for pink diamonds and has been found to be part of the rare subgroup comprising less than 2% of all gem diamonds – known as Type IIa: stones in this group are chemically the purest of all diamond crystals and often have extraordinary optical transparency.

“The Pink Star is a true masterpiece of nature, beyond characterisation with human vocabulary” GIA Monograph written for the Pink Star, 2013

Quek Chin Yeow, Deputy Chairman, Asia and Chairman International Jewellery, Asia said “Over the years Sotheby’s Hong Kong has played host to many outstanding stones and sales including the 118.29 carat oval the colour flawless diamond sold in October 2013, still current world auction record for any white diamond as well as the fancy vivid blue 10.10 carat De Beers millennium Jewel 4 which set records for any jewel sold at auction in Asia in April 2016. The market for the world’s finest diamonds and Gemstones remains buoyant at Sotheby’s Hong Kong is honoured to present at auction pink star this spring following these world records.”

Mined by De Beers in Africa in 1999, the 132.5-carat rough diamond was meticulously cut and polished over a period of two years and transformed into this stunning gemstone. According to the records of the GIA Laboratory, the Pink Star is the largest Flawless or Internally Flawless, Fancy Vivid Pink, Natural Colour, diamond they have graded in a letter issued in April 2016.

The diamond was on show at Sotheby’s in London and 77Diamonds.com managing director Tobias Kormind saw it and had this to say about it.

Q: What is so special about this diamond?

“I’m confident this diamond will prove irresistible for the world’s leading diamond collectors and may sell for over $100m which would far surpass the conservative $60m valuation by Sotheby’s. I have viewed the Pink Star, and it’s exceptional, perfect in every way.

> the 24.78 carat fancy intensive Graff Pink, which sold for $46.2m, which holds the record for a pink diamond at auction.

> the most expensive diamond ever sold at auction; the Blue Moon of Josephine, a 12.03 carat blue diamond which sold at Christie’s Geneva in Nov 2015, for $48.4m; the highest price per carat ever paid for a diamond at auction, $4.1m.

Q: Why is the timing so interesting?

“In 2014 the Pink Star looked like it was sold by Sotheby’s for $83.2m but ultimately the buyer didn’t pay up. It is a brave move by Sotheby’s to bring this back to the market so soon. It is also brave because in the last 12 months two other major diamonds offered by Sotheby’s did not sell – the Lesedi la Rona, a 1109 carat rough diamond, the second largest rough diamond to be discovered in over a century and which went on the block at Sotheby’s London in June 2016, was estimated to sell for $70m but did not sell at all and in April 2016 the Shirley Temple, a polished blue diamond with Hollywood credentials thought to be worth $35m also didn’t sell, prompting gasps of shock in the Sotheby’s New York salesroom. However the sale is extremely timely against a backdrop of the global economy improving including emerging markets, luxury demand returning in China and leading Western economies trading at near record highs due to the Trump effect.”

About 77Diamonds.com: 77Diamonds.com is Europe’s largest online seller of diamond jewellery. 77 Diamonds clients include Forbes Rich List members, A list sports personalities and Hollywood celebrities. They have access to the largest source of diamonds in the world. The head of the 77 Diamonds Mayfair workshop has created jewellery for De Beers, Cartier, Garrard, Boodles and has made items for the Royal Family, Liz Taylor and Victoria Beckham. 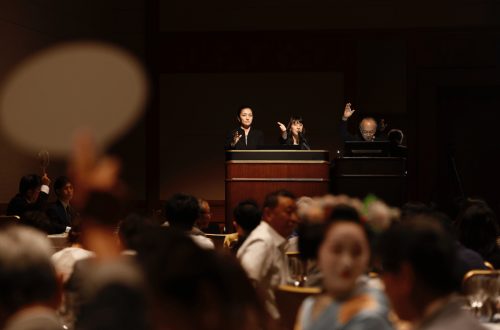