In 1885, she naturally dragged her husband to Essoyes, Champagne. Pierre-Auguste Renoir was entirely won over and enchanted by the landscapes and the villagers’ way of life and he came back there every summer with his family.

The family house was bought in 1896 and accommodated not only the Renoir family but also many of their friends. The painter found his inspiration and live models for his paintings in the Champagne region through the village laundrywomen, his children and Gabrielle Renard, a young woman from Essoyes who became Jean’s nurse and above all the master’s favourite live model.

The Côte dAzur. 1915. In his twilight years, Pierre-Auguste Renoir is tormented by the loss of his wife, the pains of arthritic old age and the terrible news that his son Jean has been wounded in action. But when a young girl miraculously enters his world, the old painter is filled with a new, wholly unexpected energy. Blazing with life, radiantly beautiful, Andrée will become his last model, and the wellspring of a remarkable rejuvenation. Back at the family home to convalesce, Jean too falls under the spell of the new, redheaded star in the Renoir firmament. In their Mediterranean Eden – and in the face of his father’s fierce opposition – he falls in love with this wild, untameable spirit… and as he does so, within weak-willed, battle-shaken Jean, a filmmaker begins to grow.

Set to launch in France, Belgium: January 2nd and in the UK in springtime 2013. This movie was presented in Cannes Festival 2012. The Première held in Troyes on December 12th with the press. Guests include Jacques RENOIR Great Grand Son of the painter, who resides in the USA and will be signing copies of his book and Sophie Renoir Great Grand Daughter who is an actress living in Paris. She was wed in Essoyes, Champagne and kept the family house till last January before it was sold to the ESPACE RENOIR.

EAT LOVE SAVOR® International Luxury Lifestyle Magazine & Bookazine is a prestigious publication beyond the ordinary. We are a foremost advocate of intelligent, informative editorials, interviews and feature. We bridge the gap between old world knowledge of luxury and the modern age need for a holistic approach to luxury living, with a feminine touch. Brands cannot pay for coverage allowing us to be unbiased in our guiding readers through our world of luxury goods, services, and experiences. For all the tiers of wealth, we are a best kept secret in luxury and a must-read for those who wish to be indulged in refinement and entertained with class. Founded, edited and published by woman, an award winning entrepreneur with an innate understanding of luxury and 30 years of independent study on the subject. We’ve been named on the list of Top Sites for Luxury in the World and Top Luxury Lifestyle Magazines to Follow. 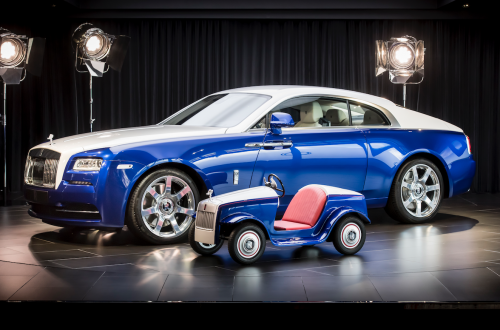 The Biggest Unveil For The Smallest Rolls Royce: Rolls-Royce SRH