Finished in hand selected, first-fill sherry butts that are seasoned with Oloroso sherry from the prestigious Bodegas Lustau in Jerez, Spain, this release celebrates the iconic sherry influence found throughout the Redbreast range.

Matured One Year in Sherry Butts

Matured initially in a combination of exceptional ex-Bourbon and ex-Oloroso sherry casks, Redbreast Lustau Edition has been wholly finished for one year in prized sherry butts from Bodegas Lustau in Jerez, the sherry capital of the world. The result is a new interpretation of the signature Redbreast character with a distinctive twist; Redbreast Lustau Edition offers a nose of dark fruits, prunes and marzipan, a luxuriously rich and creamy texture on the palate with iconic Redbreast spices, and a long, sweet finish complemented by notes of Spanish oak and Oloroso sherry.

A Long-term Relationship Forges a Kinship for Excellence

With a shared history and kinship for excellence, Redbreast Lustau Edition has been born out of the longstanding relationship between the Midleton Distillery, County Cork, and the unrivalled sherry house, Bodegas Lustau. The unique bond between these two houses was established decades ago, built upon mutual respect for craft production processes, tradition and camaraderie.

On the launch of Redbreast Lustau Edition, Leighton comments: “With Redbreast Lustau Edition we seized the opportunity to celebrate the iconic sherry influence on the Redbreast range, and to do this we turned to our old friends at Bodegas Lustau to source the finest Oloroso sherry casks in the world. I am honoured to be able to finally reveal Redbreast Lustau Edition to the world as it represents the mutual bond, based on our commitment to excellence in craftsmanship, which we have built over time with Bodegas Lustau. Language is no barrier to this marriage of Spanish and Irish craft, and the result is an exceptional new Single Pot Still Irish Whiskey that champions the iconic sherry influence of the Redbreast range, and I hope that whiskey drinkers the world over enjoy it.”

Brendan Buckley, Global Innovation & Prestige Whiskey Portfolio Director at Irish Distillers, adds: “We are delighted to introduce a fifth, permanent expression to the Redbreast range as it demonstrates the appetite among whiskey connoisseurs and spirits aficionados alike for new, innovative and diverse Irish Whiskey offerings. Since we re-launched the brand in 2011, it has gone from strength to strength and we are committed to spreading word of Redbreast around the world as the Irish Whiskey renaissance continues.

“Our work on Redbreast is part of a wider commitment from Irish Distillers to lead the revival of the quintessential Single Pot Still Irish Whiskey style and Irish Whiskey in general, to educate whiskey fans about the breadth and quality that the category has to offer.” Crafted to the exacting standards of Midleton Head Blender, Billy Leighton, Redbreast Lustau Edition is a permanent addition to the Redbreast range.

About Bodegas Lustau: The origins of Lustau date back to 1896, when Mr. José Ruiz-Berdejo, a secretary to the Court of Justice, started cultivating the vines of the family’s state in his spare time. With more than 100 years of history since it was founded, its philosophy has not changed: the pursuit of the highest quality in its offer of the widest and finest range of products. With ageing cellars in each of the three towns that make up the Sherry area (Jerez de la Frontera, El Puerto de Santa María and Sanlúcar de Barrameda), Lustau offers a huge portfolio formed by wines, brandies and vermouth. www.lustau.es

About Irish Distillers: Irish Distillers was formed in 1966, when a merger took place between Irish whiskey distillers, John Power & Son, John Jameson & Son and the Cork Distillery Company. In an attempt to reverse the decline in Irish whiskey sales, the company decided to consolidate production at a new purpose-built facility alongside the existing distillery in Midleton, Co. Cork. Irish Distillers was bought by Pernod Ricard in June 1988 and today, Jameson is the No.1 Irish whiskey in the world, selling over 5 million 9L cases worldwide and contributing more than any other Irish whiskey brand to the phenomenal global growth of the category. Irish Distillers is committed to driving continued, sustainable growth of the Irish whiskey category.  Irish Distillers’ portfolio of whiskeys is comprised of Jameson, the world’s no.1 Irish whiskey; Powers, the robust super premium whiskey for discerning drinkers; and the much-acclaimed brands that comprise the Irish Distillers’ Prestige Collection – the Single Pot Still Whiskeys of Midleton which includes the Spot range (Green Spot, Yellow Spot) and Redbreast, Ireland’s most awarded single pot still whiskey brand – and the pinnacle of the Prestige Collection, Midleton Very Rare. www.irishdistillers.ie

Additional Details: Bottled at 46% ABV and without chill-filtration, Redbreast Lustau Edition is available at the following RRPs; Canada, $90; France, €65; Ireland, €69; and UK, £55. It will also be available in the United States from October 1st 2016, at RRP $69.

Magnificent Macarons: The Classic Confection Always in Style!
Letter from the Publisher: Love Before Money. Passion and Purpose in Modern Publishing: EAT LOVE SA...
Maîtres du Temps, a Concept in Timepieces
ESCAPE: The Anam - Five Star Colonial Beach Resort, Vietnam
The Summer House of the Bishop of Arles
Designer to Watch 2015: GUY & MAX
Azimut Yachts at the Cannes Yachting Festival 2016 with Fleet of 17 Yachts
Bentley: The Book
The Creative World of John-Paul Welton
In Her Words: Interview with HBO series "Game of Thrones" Actress Laura Pradelska
Share this: 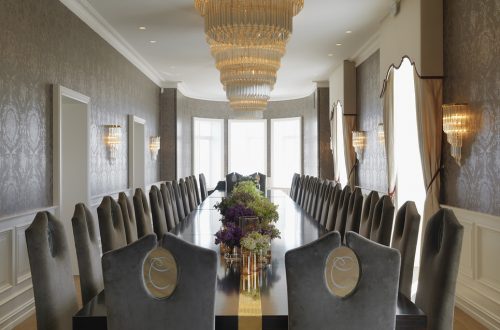