Food and family have always been woven into the fabric of Darren Brown’s life. Born in Coquitlam, British Columbia, he remembers being a part of the family kitchen brigade from a young age, when setting the Christmas table for 75 was an annual event. During summers on B.C.’s Sunshine Coast, he learned all about eating from the land and sea; picnic tables would be loaded with fresh prawns and salmon caught the same morning.

Darren’s first “official” kitchen duty began in the ’90s, working with Chef Deb Connors at Horizons. She was his first professional mentor and shared with him her passion for West Coast cuisine. At CinCin next, Darren worked seven days a week – as Pastry Chef by day and Line Cook by night – to ensure he understood every “nook and cranny” of the operation. Proprietor Jack Evrensel’s attention to detail did not go unnoticed. Darren was on to Whistler next, to open Quattro, the resort town’s top Italian restaurant.

A year and a half later, he caught the travel bug, and discovered an appetite to take on French cuisine. What better place than in Antibes, France and onboard Merv Griffin’s 150-foot yacht? During summers in the Mediterranean and winters in the Caribbean, Darren cooked for celebrities that ranged from James Bond to the Princess of Spain. He became a student of food, finding answers to his own questions: why paella was different in Barcelona than in Madrid, why Italian meals are coursed the way they are. He studied the culture of the meals and how they came together. He traveled the Pacific Rim, from the West Indies to French Polynesia. “I learned that the food needs to speak for itself,” says Darren. “Guests would be paying up to one million dollars for a week’s stay. I would have two hours on shore to purchase whatever I could cook. This forced me to play with the food and cook with what was appropriate and available.”

Three years later, Darren headed back to North America to work as Executive Chef at Merv’s Trader Vics in the Beverly Hills Hilton Hotel. There, he met his wife, Alison. In 2002, he joined Rumjungle at Mandalay Bay in Las Vegas as Executive Chef, and oversaw China Grill, Blue Blanc Rouge Bistro and Red Square restaurant as well. Two years later he “caught the eye” of renowned Michelin three-star chef Alain Ducasse, from whom he learned about sourcing and [pullquote]“Being true to the product, knowing where it comes from, doing the right thing and the least with it,” says Darren. [/pullquote]“But the most important lesson he taught me was respect for the people you work with. Taking the time for your team and allowing them to be creative – this was the most humbling part of my career.” In 2004 he opened the exclusive Mix Restaurant, and in 2005 he was appointed Assistant Executive Chef of the Mandalay Bay Resort & Casino, which required him to oversee the culinary operations of 1.8 million square feet of event space, in-room dining for 5,500 guest rooms and more than 20 restaurants.


He then received the greatest news of all: he was going to be a father. There was only one place he wanted to bring up his children – in Vancouver, the ultimate destination for lifestyle, family, and for an accomplished culinary career. “Vancouver offers the most diverse food scene in the world. There are so many spectacular restaurants across the spectrum. You can eat like a star no matter what the price and the product is available for this food savvy city.” He joined the Glowbal Restaurant Group as Corporate Chef and opened Coast Restaurant along with overseeing all culinary operations. He and Alison now have two boys Tristan and Micah, aged 3 ½ and 6 months.

After all of his globetrotting Darren believes it is fate that now brings him to the iconic Fairmont Pacific Rim as Executive Chef, and he knows his experience abroad will pay off. “My philosophy is simple,” says Darren. “Use the best product at the best time and let it speak for itself. Our West Coast ingredients are conducive to the Pacific Rim style of cooking and I look forward to showcasing this to our guests.”

Sweat red onions, roasted garlic, and 1/4 of the raw bacon, (left in large chunks that will be easy to remove later), on low heat until translucent. Add beans and stock and cook until beans are tender, reserving a liter of stock for later.

Sauté the remaining bacon lardons and cippolini onions until golden, add the butternut squash and continue to cook until everything reaches a deep caramelization and squash is tender. Deglaze with remaining prawn stock as needed, simmer gently with slightly more stock than the beans are ready to absorb, and reserve while you cook the sturgeon. Once the sturgeon is done, add the prawns to your cassoulet and allow to poach in the surplus stock as it reduces down to a ragout consistency.

Transfer to a bowl, top with sturgeon, creme fraiche and caviar.

Dining in the Stars: The Ritz-Carlton, Westchester in New York 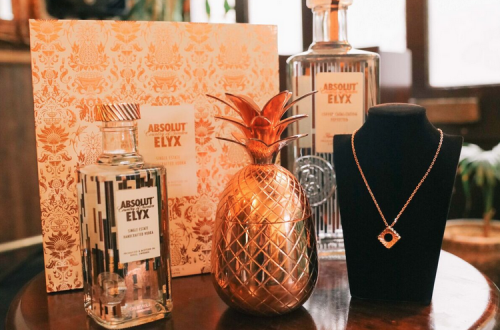